This study investigate whether contrast water therapy (CWT) assists acute recovery from high-intensity running and whether a dose-response relationship exists. 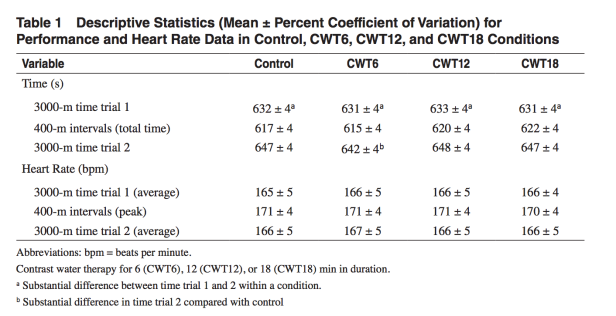 Contrast water therapy for 6 min assisted acute recovery from high-intensity running; however, CWT duration did not have a dose-response effect on recovery of running performance.

The possibility of a placebo effect in the present study is acknowledged. However, in studies of this type, it is virtually impossible to blind the participants and researchers to the water temperatures and immersion durations. Effort and motivation during the 3000-m time trials were measured, as they are factors that can influence exercise performance. However, here the participants reported few differences in effort and motivation between conditions; therefore, any differences in performance are unlikely to be due to these factors.