This study examined the effect of CWI (15min,temperatures of 8◦C and 15◦C) as a recovery strategy applied between two exhaustive submaximal performance in normothermic ambient conditions (∼22 ◦ C).

temperature ,blood lactate and heart rate were recorded throughout, and VO2, running economy and exercise times were recorded during the running sessions.

Running time to failure (min) during Ex2 was significantly longer following CWI-8 than CON but not different between CWI-15 and CON or CWI-8 and CWI-15). 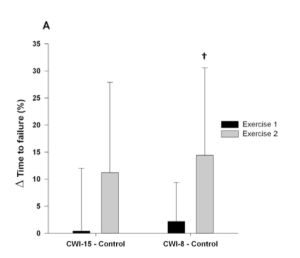 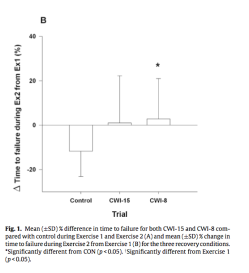 This outcome was supported by qualitative analyses showing a ‘likely’ beneficial effect of CWI-8 and CWI-15 compared with CON and a moderate ES.