It has been estimated that much of what we do, perhaps 95% of an adult human’s activity or behavior is routine and automatic, outside of voluntary conscious cognitive awareness. These are things we do spontaneously, “without thinking,” simply because they need to be done. These automatic behaviors are efficient, economical, elegant, initiated without uncertainty or hesitation, and always adaptive in context and adjustable to contextual changes.

This processing model relies upon direct sensorimotor feedback, which is inevitably delayed by numerous factors, including the time necessary for processing sensory information, and the delay for transmission of motor commands from the brain to the muscles. This means that function processing is too time and resource consuming to account for how smoothly and quickly people are generally able to coordinate and control their bodies and objects within the external world.

Evolutionary processes favored the development of predictive or “anticipatory,” and simulative or “imaginative” mechanisms for the purpose of action control and not for cognition per se. Both procedural (skill) knowledge and declarative (semantic) knowledge can thus be explained and understood in terms of continuous “on-line” sensorimotor anticipation and “off-line” simulation of (imagination or thinking about) potential action. 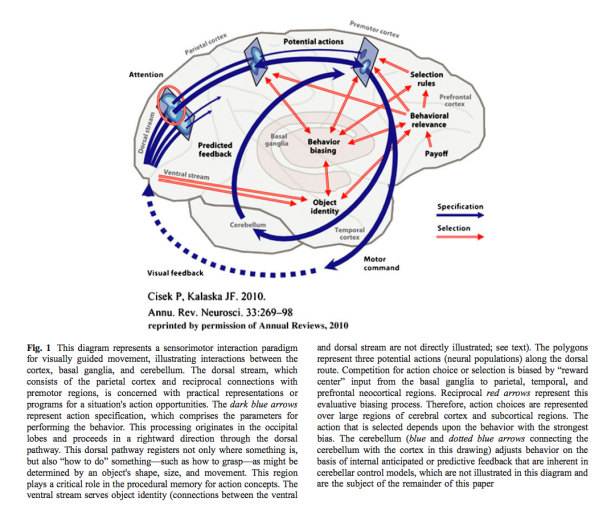 For an adult learning a new task, the first step of learning proceeds consciously and involves neural signals from the premotor and primary motor cortices and the temporoparietal cortex. When the behavior is automatic, one way to release it is through a voluntary motor command. But an individual can become so skillful and can acquire such expertise that he or she no longer needs to be conscious of the intention to initiate a movement. In a professional basketball or soccer game, the participants engage in multiple rapid, precise, creative movement sequences, each aspect of which they never could have practiced for each specific context in which they are generated. After the game, when the athlete watches a recording of the competition, he/she recalls little or nothing about how the artistic movements were executed, and may not even remember the movements themselves. This implies that they were performed automatically, without conscious awareness. These movements occur creatively, “on the fly” and “on-line” as the situation develops and unfolds, absent the need for conscious direction.

In this paper, we examined the close relationship between movement and thought. We presented a model of behavior based upon continuous interaction with the environment in which behaviors occur in “real time.” Within this model and the dual-tiered paradigm of adaptation it supports, we proposed that the brain evolved for the purpose of controlling action. This development required the evolution of both on-line (motor skill acquisition) and off-line (simulative thought rehearsal) sensorimotor prediction mechanisms. By directly connecting movement to thought, we have also examined important ways in what this model might apply to language processes, communication processes and social cognition, and we have suggested how the model might apply to concepts such as theory of mind.