The aim of this blogpost is to share some thoughts on the Rate of Force Development (RFD) following anterior Cruciate Ligament reconstruction (ACLR).

An ACL injury can be devastating for athletes of all levels.

Up to 85% of ACL injuries are non-contact injuries which occur during pivoting actions, in particular change-of-direction maneuvers (jumping, cutting, and pivoting). An ACL will typically ruptures at approximately 17 to 50 milliseconds post initial ground contact in 5-30 degrees of knee flexion during a forceful valgus moment (1).

The predominant complaints following ACL injury are knee laxity, instability and in some cases pain. These factors can prevent athletes from participating in their specific sport at previous levels of intensity and competition.

Surgery is not necessary in all cases and is not a guarantee for return to previous sporting level. A systematic review and meta-analysis showed that 81% returned to some kind of sport, but only 55% returned to a competition level (2). In addition the risk of sustained a second ACL rupture or knee injuries in was higher (3). Despite this, elite athletes appears to return to their pre-injury level of sport within 6 and 13 months of surgery (4).

To determine safe and successful return to sport following surgery, the athlete should pass a number of modifiable criteria which have been clinical proven to be risk factors for potential ACL re-injury. Some of these criteria are based on: Limb symmetry index (LSI) on 90% difference in m. quadriceps deficit hamstring strength, a hamstring to quads ratio (H/S-ratio) at 60% executed on the biodex isokinetic test with 60 degree/second (meaning the velocity is constant regardless of the force applied), hop tests (Single hop, triple hop, triple crossover hop), on field training and running t-test. (4). Kyritis et al. demonstrated that athletes who returned to football without meeting this criteria were four times more likely to encounter re-ruptures (4).

In addition to the functional criteria, a time oriented model has shown to further reduce the risk of re-injury. For every month of delayed return to sport up until 9 months post ACL reconstruction, the rate of knee reinjury was reduced by 51% (6). Despite this,  Welling et al. found only a limit number (11%) meet the return to sport criteria after 9 months post anterior cruciate ligament reconstruction (7).

Although muscular strength as measured by 90% LSI in peak force is a common criteria standards, previously literature has demonstrated that maximal force although important, is only one measure of readiness to return to play. Peak force does not reveal is the time to develop peak force, also known as rate of force development (RFD) (10).

RFD measures the ability to generate explosive muscle force and is defined as the speed at which the contractile elements of the muscle can develop muscle force (9,13) from a low or resting level through a neural drive. In other words, RFD is the muscle activation (RFD = Force / Time) and is not determined by the actual movement itself.

Subsequently, we can categorize RFD into different ranges of time-intervals. Early phases are typically measured after 0-50ms (also called initial RFD or starting strength), and the late torque development, 0-100ms, 0-250ms, and a later phase at <250ms (9,13) where peak force is reach during a maximal voluntary contraction (MVC).(Figure 1). 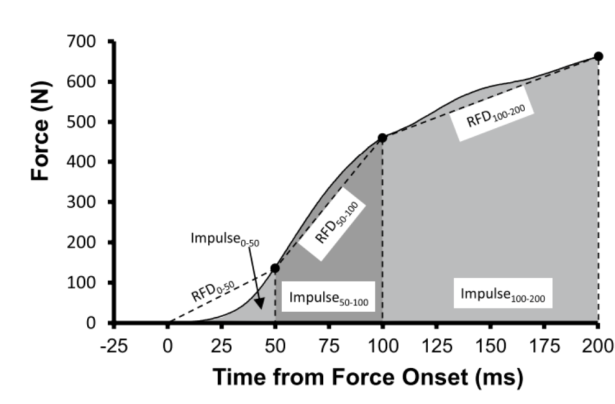 This could have important clinical relevance as the estimated time of ACL injury, as mentioned previously, occurs in range of 17-50ms after initial ground contact. Therefore it can be hypothesized that early RFD  is more important than MVC when assessing muscle muscle stabilization of the knee joint in the context of most sporting pivoting playing situations.

Another important risk factor in rehabilitation of the ACL is the balance between hamstring and quadriceps muscles, also referred to as the hamstring / quadriceps H/Q ratio. This ratio is important as the contraction force of m. quadriceps during knee extension produces substantiel anteriorly directed shear force of the tibia relative to the femur at extended joint angles of 0–35 degrees of flexion (14) Therefore, a rapid co-activation of hamstrings, together with ACLR itself, can counteract and reduce this anterior shear force, which may be protectable factor the ACL.

In a study Jordan, M. Aagaard, P. and Herzog W.  looked a elite alpine skiers and ACL injuries. As mentioned beforehand, the ACL mechanism often occurs after 60ms in a rapid increase in knee flexion 26 to 63 degrees in a combination of knee valgus and a tibial internal rotation. So there is external forces acting above the knee, and those external forces are causing a anterior draw load on tibia and a passive strain in the ACL where is being ruptured. So there is a major discrepancy between injury time (60ms) and maximal strength (250-600ms), and therefore we need to look at the rapid hamstring and quadriceps force production (explosive strength) as this timeline is critical to active stabilize that knee joint. What the study found was a clear deficit in a skier with ACLR in knee extensor torque (Nm) in both peak force and rate of force development.

To protect the ACL, it can be hypothesized that the neuromuscular system of the hamstring

In a cross-section study by Zebis and her colleagues, it was observed in a group of female football players, that a lower RFD H/Q in the initial phase of contraction, could be a possible risk factor for sustaining future ACL injury. Interestingly, the MVC H/Q ratio did not differ significantly amongst tested players.

Therefore, as a clinician, it can be speculated that including initial phase of RFD H/Q, rather than MVC H/Q strength ratio, throughout the rehabilitation could provide additional information regarding the underlying impairments in force (11) and may be a substantial factor for both injury reduction and a quicker return to performance (figure 3).

In continuation of RFD, the time to perform an exercises/movement can also be explored. This is referred to as the stretch shortening cycle (SSC).

Simply explained, the stretch-shortening cycle (SSC) is where the muscle undergoes an initial lengthening “pre-stretch” (eccentric phase), followed by an isometric transitional period (amortization phase), leading in a shortening concentric action. In the pre-stretch, elastic energy is stored in tendons while muscle spindles are stimulated. In the following concentric contraction, this energy is transferred through the tendon, and a greater force is produced. It seems that this transfer of energy is influenced by the  stiffness of the tendon, and a stiffer tendon transfer restored energy more efficient during the concentric contraction influencing both RFD and MVC (14,15).

You can imagine a limb just before contacting the ground. Just before contact there is a burst of muscle firing which pre tension the muscle and the tendon. This course some tension thoughout the muscle. So when the foot hits the ground there is minimal length change of the tendon and muscle (mechanical energy absorb) and after this rapid stretch, we will a dynamic shortening of the muscle (mechanical energy released).

The SSC-movement can be subclassified as either fast-SSC: <250ms, or slow-SSC: >250ms. When the movement is slower, the muscles have longer time (300ms+) to form cross-bridges and thereby reach a higher MVC (8,9).

In contrast, during a fast-SSC movement, each movement takes 80-160ms (7). Here the athlete does not need to produce a high amount of force in every contraction. This might be more related to a side-cutting maneuver, where it have been found that the hamstrings activation is only 30–50% of MVC (13).

The duration of the SSC can be measured within a single joint (eg. ankle, knee, hip) or entire lower limb, however it is important to note that introducing sports specific exercises with varying SSC durations may increase force and therefore improve performance and aid safe return to sport.

In general, the RFD has been reported to change depending on many factors such as muscle fiber type, muscle cross sectional area, fascicle length, penetration angle, motor unit recruitment, firing frequency, inter muscular coordination, muscle-tendon stiffness and training age. The figure below depicts some of those possible factors and how clinicians can enhance it in clinical practice (Figure 5). Exploring  these components in further details is beyond the scope of the blogpost (12,15). 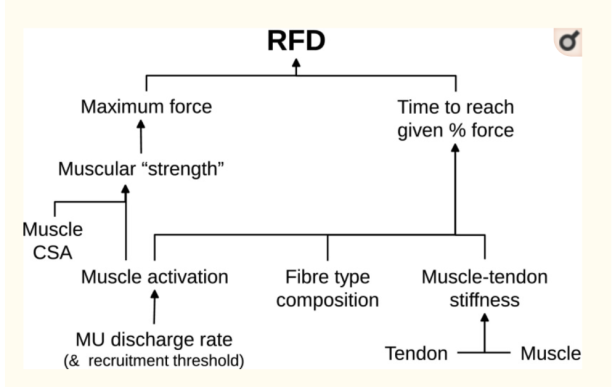 The aim of this blogpost was to share thoughts and explore literature pertaining to RFD in adjunction to maximal strength during ACL rehabilitation.

Additionally it can be hypothesized that incorporating resistance training with different SSC timings aiming to increasing RFD in the early phase of contraction may be beneficial in both performance enhancement, injury prevention and the overall athletic development during the rehabilitation process.

Future studies should focus on assessment of RFD as a predictor of return to play, and RFD measurement in the fatigued athlete.